Home Politics U.S. President Donald Trump reviews papers during an interview in the Oval Office of the White House in Washington, D.C., U.S., on Thursday, Aug. 30, 2018.

U.S. President Donald Trump reviews papers during an interview in the Oval Office of the White House in Washington, D.C., U.S., on Thursday, Aug. 30, 2018. 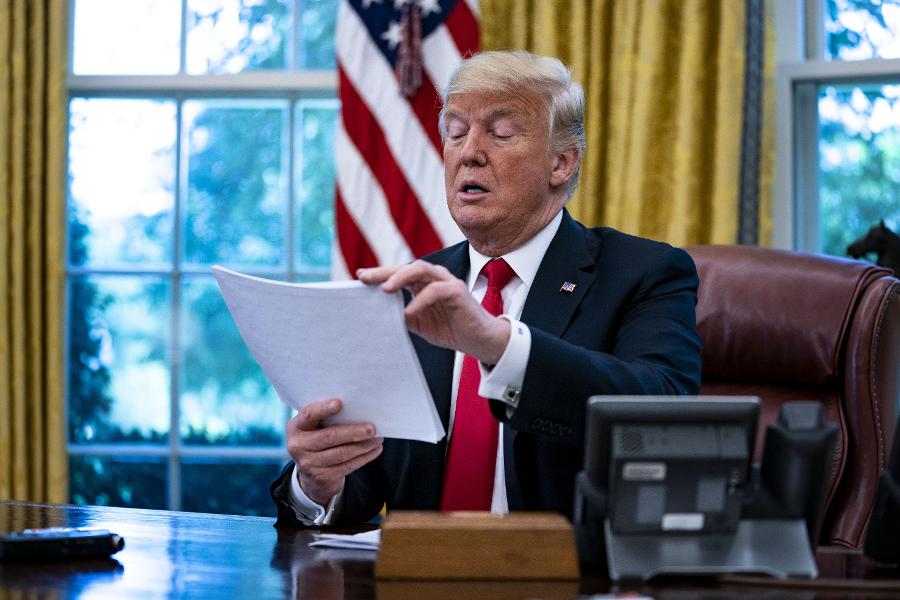 From Naeem Aslam Reports:
What To Look For In Markets Ahead of Fed's Decision

European markets and U.S. futures are trading higher by ignoring Trump’s statement from yesterday at the United Nations General Assembly. His speech pushed the markets lower yesterday but traders have chosen to ignore the geopolitical tensions for now. Perhaps, the equity market is more optimistic about the oil price hitting the 4-year high, and there seems to be no end in sight given that Trump is increasing the pressure about putting a stop on the Iranian oil export. Speaking at the United Nations headquarters yesterday, he stated: “OPEC and OPEC nations are as usual ripping off the rest of the world, and I don’t like it.”
Trump said he doesn’t regret appointing Jerome Powell as Federal Reserve chairman, even after criticizing interest rate increases by the central bank.
It is clearly in the United States’ best interest, that should the oil price stay where it is, it would give a much stronger incentive to U.S. shale oil producers for pumping more oil. But, if you take a look at the inflation equation of the country, then yes, higher oil prices do not paint a rosy picture. The trade-off is that a lower oil price equals a downward spiral for the U.S. shale oil industry. This brings the inflation in check. The alternative is thathigher oil prices will boost the U.S. shale growth, which anchors the inflation in the country.
Trump also hit his stride during the speech and made his stance clear about the ongoing trade war. He was acute with his approach that the U.S. would “no longer tolerate abuse”.
FOR MORE CLICK HERE
U.S. President Donald Trump reviews papers during an interview in the Oval Office of the White House in Washington, D.C., U.S., on Thursday, Aug. 30, 2018.